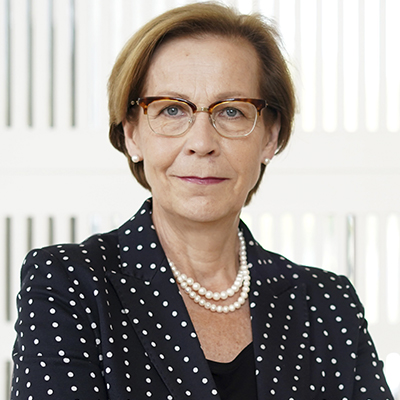 Ritva Koukku-Ronde became Ambassador of Finland to the United States in September 2011. Ambassador Koukku-Ronde arrived in Washington after working at the Ministry for Foreign Affairs for almost three decades. Before her posting as Ambassador, she was Under-Secretary of State for global development issues at the Ministry for Foreign Affairs in Helsinki. She also served as Director General at the Department for Development Policy and Deputy Director General at the Department for Europe. Furthermore, she has held the position of Minister and Deputy Head of Mission at the Finnish Embassy in Bonn and Berlin and earlier as deputy head of mission in the Hague and Nairobi.

As the 35th Secretary of the U.S. Department of Commerce, Secretary Gutierrez was responsible for heading a Cabinet agency with almost 40,000 employees and a $6.5 billion budget focused on promoting American business at home and abroad. During his tenure as Secretary, he worked with foreign government and business leaders to advance economic relationships, enhance trade, and promote U.S. exports. Secretary Gutierrez also played a key role in the passage of landmark free trade agreements that strip away trade barriers, expand export opportunities and boost global investment.

Prior to joining the Ministry in 1985, Koukku-Ronde worked as a journalist. She holds a Master’s degree in History.