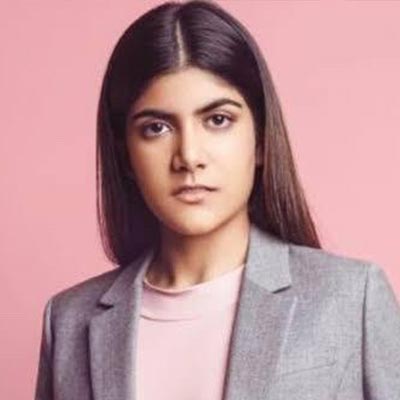 Ananya is a 26-year-old singer-songwriter, entrepreneur and mental health advocate. Recently Ananya made waves by being the only Indian signed to Maverick Management who manage the likes of U2, G-Eazy, The Weeknd and Miley Cyrus.

The first homegrown artist to go Platinum with an English language track in India and break the dominance of film music on the Indian music scene, Ananya has hit over 350 million global streams.

Last year, Ananya released the infectious ‘Day Goes By’ with Jamaican-American hitmaker Sean Kingston, one of the first major collabs between US and Indian music artists. This followed multi-platinum selling hits, ‘Hold On’, ‘Meant To Be’, ‘Circles’, ‘Livin’ the Life’ (remixed by Afrojack), ‘Better’ and the release of her first EP ‘Fingerprint’ with UMG and Island Records, which included hit single ‘Blackout’ featuring Nigerian hip-hop stars Vector and WurlD.

Her latest single ‘Let There Be Love’ marks her debut on American radio as the first Indian to be featured on major top 40 pop radio stations such as Sirius Hits 1 and Radio Disney.

The self-taught santoor and guitar player has been propelled from low-key gigs around London to performing at some of Asia’s biggest music events including Global Citizen, Oktoberfest and Sunburn, and opening for artists like Wiz Khalifa and Coldplay. Ananya has scaled the charts at home and appeared on major playlists and radio stations in the US, UK, Europe, Australia, the Middle East and SE Asia. She has also collaborated with major producers and writers including Jim Beanz (Rihanna, Demi Lovato, M.I.A), DJ Buddha (Pitbull, Jason Derulo, Afrojack), pop guru Nick Atkinson (Lewis Capaldi, Little Mix), Edd Holloway (Gabrielle Aplin, Lewis Capaldi), Empire State of Mind writer Angela Hunte and Grammy-nominated Mood Melodies.

Listed as one of GQ’s Most Influential Young Indians, a Forbes Woman to Watch, an ET Panache Trendsetter as well as being featured on the Forbes 120 Power List, Ananya is a strong believer in equality.

She set up, Mpower in 2016 along with her mother, which works to stamp out the stigma around mental illness in India and to provide world-class care where there has been little to date.

She also promotes female empowerment through her microfinance business Svatantra which helps women entrepreneurs in rural India grow their businesses and become financially independent. Ananya founded the business at the mere age of 17. The organization has been placed in the top 25 best places to work in its segment by globally recognized Great Places To Work 2020. Moreover Svatantra’s in-house app Saathi has won multiple awards for innovation including by the Economic Times, and has been rated A+ by CRISIL.
Register now