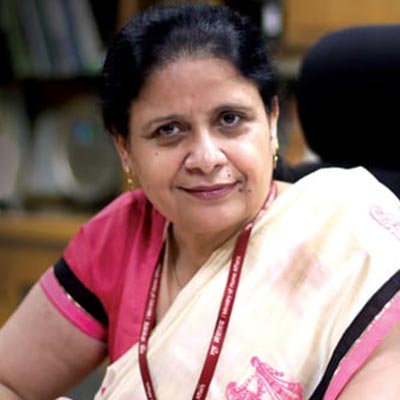 Dr. Neeta Verma is the Director General of National Informatics Centre, a Premier Science and Technology organization of the Government of India. With a career spanning over three and a half decades, she has been instrumental in implementing high impact digital initiatives across the country. In her current role as DG-NIC, she is spearheading the development of digital platforms for various initiatives of the Government of India under the ‘Digital India Program’.

She has been an active proponent of leading citizen engagement through technology led government initiatives at various levels of governance. She was instrumental in setting up of the technology platform for MyGov, which is a citizen engagement and crowd sourcing platform engaging over one crore citizens. It was under her leadership that NIC launched open data platform to release government data in open for public good. Under her leadership, NIC also established National Data Centers at various locations in the country and later on launched the first National Cloud for Government in 2014 to provide state-of-the-art ICT Infrastructure to Government Departments for delivery of citizen services.

At NIC, she has led the establishment of one of its kinds Centres of Excellence in Blockchain, Application Security, Artificial Intelligence, and Data Analytics. She has also played a key role in setting up of NIC CERT (Cyber emergency response team) in 2017. In 2019, She was featured amongst the top 55 inspiring women around the world who have showcased the prowess of technology in government sector.

Under her guidance, NIC has developed various citizen centric platforms such as eHospital which has helped connect patients, doctors and hospitals on a single digital platform. In the current COVID-19 crisis, she is working closely with various national institutions such as Indian Council of Medical Research (ICMR), Ministry of Health and Family Welfare (MoHFW), National Centre for Disease Control (NCDC) to extend necessary technical advice and support.

She was also the member of the Advisory committee for National Digital Health Blueprint (NDHB), which is a national initiative of the Ministry of Health and Family Welfare (MohFW), Government of India, focused on creation of a common platform and providing the right ecosystem for integration of the existing disparate health information systems which have existed in silos.

She holds a Ph.D. from Indian Institute of Technology, Delhi. Her areas of research interests include applications of emerging technologies in Governance, Cyber Security, Data Centers, etc. Apart from publishing her research in national and international journals, she has also co-authored books on importance of technology in governance.

She has been regularly invited at various national and international conferences and forums to provide thought leadership around technology in e-Governance.
Register now