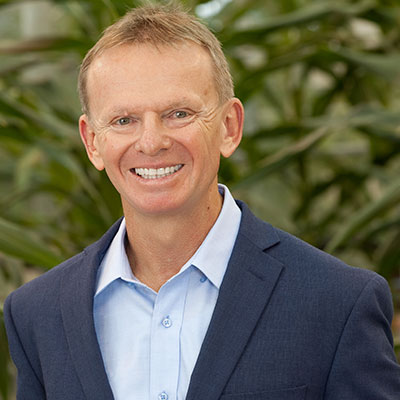 Peter Ford is President, Asia Pacific, for Corteva Agriscience. Based at the company’s regional headquarters in Singapore, he drives all commercial activities in Asia Pacific and is responsible for company leadership and strategy throughout the region.

Peter previously served as Regional Business Director, Asia Pacific, for DuPont Crop Protection, with overall responsibility for the business across the region. Prior to that, he served as Managing Director, DuPont (Chemours) Titanium Technologies, Asia Pacific.

Peter started his career in agricultural retail, joining DuPont in 1988. For 23 years, until 2011, he led various aspects of the DuPont Crop Protection business in Australia and Asia Pacific, including sales and supply chain management. He also held senior positions in North America for DuPont Crop Protection, including marketing, sales and general management. He led the Six Sigma organizations in Asia Pacific and in Europe, spearheading several large-scale projects, including Asia Pacific and Global SAP R3 implementations. He was promoted to Director of Marketing & Strategic planning for Crop Protection in 2011 and relocated to Singapore.

Peter earned his MBA (Hons) at Emory University’s Goizueta Business School in Atlanta, where he graduated with distinction (honored as Most Outstanding Student). He attained Six Sigma Master Black Belt accreditation in 2001. Peter’s vision for the future of agriscience is shaped by his academic training and his expertise in various functional roles throughout the organization. His varied experience and global perspective have reinforced a commitment to responsible agriculture and a passion for making meaningful contributions to individual farmers and to their communities.

Born in Australia, Peter is an active sportsman, competing in triathlons two to three times a year. He lives in Singapore with his wife, and they have three grown children.
Register now