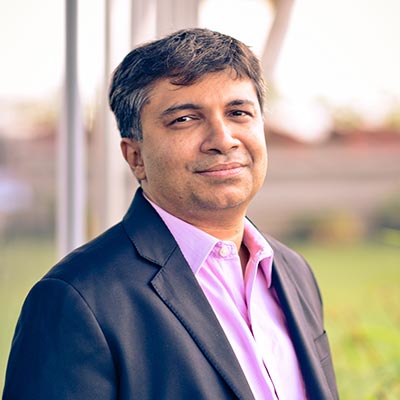 Saugata Gupta serves as the Managing Director and Chief Executive Officer of Marico Limited. He joined Marico in 2004 as the Head of Marketing and was elevated to CEO of India Business in 2007 and in 2014 he took over as Managing Director of the company.

A dynamic leader, he is responsible for driving the company’s growth and strengthening its presence both nationally and internationally. He has helped transform Marico into a high performing business with a commitment to sustainable development and best in class governance.

Known for his performance-oriented approach, Saugata drives Marico to be a future-ready organization committed to consistent profitable and sustainable growth combined with societal value creation. Under his guidance, Marico today has expanded its presence across 25 countries spread across emerging markets of Asia and Africa. During his tenure, Marico’s market capitalisation crossed over USD 8 billion in 2021 and it recorded a turnover of over USD 1 billion in FY20-21.

During this period, Marico has been recognised across various forums for its commitment to sustainability and accountability in business operations. Marico ranked highest amongst FMCG companies in the Crisil ESG performance score - ESGuage 2021 and has been ranked amongst the Top 10 in corporate governance among all constituent companies of the S&P BSE 100 Index. Marico has also been featured in the ‘LEADERSHIP’ category on the IFC-BSE-IiAS Indian Corporate Governance Scorecard as assessed by IiAS in December 2020. Marico ranked 6th among India's most sustainable companies with an A+ rating by SUSTAIN LABS PARIS in association with BW Businessworld and was awarded the Best CSR Practices award at Responsible Business Awards 2021. Marico is amongst India’s 5 Best Workplaces in FMCG as per Great Place to Work® Institute (India) and one of the 25 Most Desirable Companies To Work for across sectors, as per the Dare2Compete.

Saugata was ranked #4 and #47 in the FMCG sector and Pan-India respectively in the Business Today-PWC list of India’s Top 100 CEOs in 2017 and was ranked as ‘India’s Most Valuable CEOs’ by Businessworld in 2016 and 2018. He has been recognised as the Best CEO - Private Sector at Forbes India Leadership Awards 2019. He was also featured in the top 100 Business Leaders List 2020 by Impact Digital Power 100.

Saugata is an alumnus of IIM Bangalore and holds a chemical engineering degree from IIT Kharagpur.
Register now