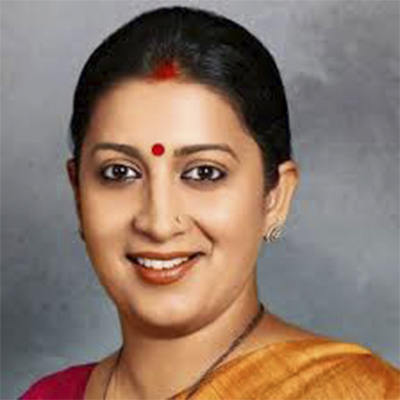 She has previously served in the organization in various posts such as National Secretary (twice), 5 term Member of the BJP National Executive, Vice President of BJP Maharashtra Youth Wing, BJP Maharashtra State Secretary, National Vice President and as National President of BJP Women’s Wing has significantly and successfully pursued Permanent Commission for Women in the Indian Army by facilitating legal aid to women officers. She has also launched ‘Saksham’- the 1st ever Vision Document released by any political organization in India, which underlines policies, programs and implementation tools for the upliftment of the Differently Abled in India. In the 126th Assembly of the Inter Parliamentary Union, Mrs. Smriti Zubin Irani was unanimously elected as a Member representing the Asia Pacific Region to the Task Force responsible for establishing the 1st ever Committee for Young Parliamentarians in the IPU. At the same Assembly, Mrs. Irani was also unanimously elected by Member Nations as Rapporteur for the Standing Committee on Sustainable Development, Finance and Trade. The World Economic Forum has named Mrs. Irani as the Young Global Leader from India for the year 2015.
Register now