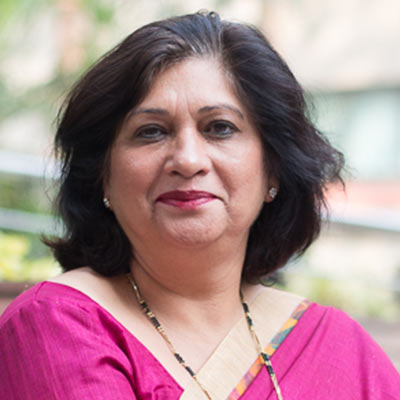 Dr Vibha Dhawan is the Director General of India’s premier research institution- The Energy and Resources Institute (TERI) and has been associated with TERI since 1985. Dr Dhawan is actively involved in research as well as policy development at the national and international levels. Dr Dhawan is a well-published researcher and has been instrumental in the establishment of the highly successful Micropropagation Technology Park at TERI. In the area of advanced biofuels, she guides the activities of the DBT-TERI Centre on Integrated Production of Advanced Biofuels and Biocommodities.

She held several leadership postions such as being the Vice-Chancellor of TERI School of Advanced Studies from 2005-2007. She is currently serving as Adjunct
Professor, Consul General of South Asia Partnership, Michigan State University. She is a Fellow of the National Academy of Sciences, India. She is a task force member of a number of committees with entities such as the Department of Biotechnology (DBT), the Biotechnology Industry Research Assistance Council (BIRAC), the Biotech Consortium India Limited (BCIL), among others. She has served on the boards of prestigious organizations in India and overseas including Jawaharlal Nehru University, Ambedkar University, Ayurvet Foundation and Centre for Bioscience and Agriculture International (CABI).

She has also successfully completed a number of international assignments such as Coordinator for the Asia Pacific Consortium on Agriculture Biotechnology (APCoAB); Advisor to Director General, The International Maize and Wheat Improvement Centre (CIMMYT); and Deputy Director, Research Partnerships & Co-ordination with the Borlaug Institute for South Asia. Her other contributions include developing e-contents for the post graduate programme in biotechnology for the University Grants Commission. She was also an Advisor, Bio-resources & Biotechnology, to the Late Tarun Gogoi, the former Chief Minister of Assam.

She is the winner of Indian Women Achievers Sammaan 2017 by NRI Achievers; Women Leadership Agriculture Award 2016 by the Indian Council of Food &
Agriculture; First Biotech Product and Process Development and Commercialization Award of the Department of Biotechnology in 2000, the Kamal
Kumari National Award for Science and Technology and the first All India Biotech Association (AIBA) award in 1998